Back in October and November 2013, London’s Dorchester Hotel was offering a ‘Solo’ breakfast in celebration of the publication of William Boyd’s James Bond novel, Solo. The book begins with Bond eating breakfast at the hotel. I this an opportunity I wasn’t going to miss, and so I booked a table and travelled down to the Dorchester to enjoy my own breakfast with Bond.

Sitting down in the ornately-decorated breakfast room, I was handed a complimentary copy of Solo and a facsimile of a breakfast menu dating to 1969, the year in which the book is set. As much as I was tempted by the kedgeree, grilled chop or stewed prunes on the menu, I was here to have what Bond had, and that was helpfully described on the back of the menu:

“…four eggs, scrambled with pepper sprinkled on top, half a dozen rashers of unsmoked bacon, well done, on the side and a long draught of strong black coffee.”

James Bond’s breakfast choices, as described in the original novels, are more varied, and I was able to supplement the breakfast Boyd gives Bond with items mentioned by Fleming. I ordered orange juice (which Bond orders for breakfast in New York in Live and Let Die), and had my eye on a pot of marmalade on the table (Bond takes toast and marmalade during the same New York breakfast, and marmalade is mentioned again in From Russia, with Love).

As for the scrambled eggs and bacon, I can only say that they were cooked to perfection. The eggs were perhaps not as runny as Fleming – and presumably Bond – would like, but they were moist and delicious (and suitably peppered as Boyd described), and nicely balanced by the crisp bacon.

The meal was accompanied by a pot of coffee, which I initially drank black as Bond would have done, although I confess I added sugar, which would have received Bond’s disapproval. I duly had some toast and marmalade, and selected a few items from a basket of pastries, breads and croissants that had also been placed on the table. The basket is not as un-Bondian as it seems. Bond breakfasts on café complet – which typically includes croissants and bread – at Orleans’ Hotel de Gare in Goldfinger. 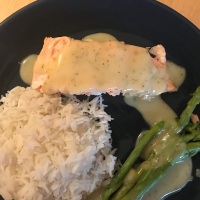